Click below for the McKay Point Reservoir Notice of Preparation:

The Tulare Irrigation District, along with the Consolidated Peoples Ditch Co. and the Visalia & Kaweah Water Co. (Owners) own approximately 500 acres at McKay Point.  The Owners intend to develop approximately 120 acres of the property into a surface water reservoir of approximately 4,500 acre-feet in storage capacity. 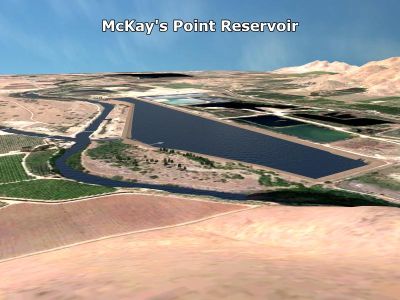 
The NRDC v. Rogers Settlement and San Joaquin River Restoration Program brought with it a federal commitment to secure $50 million in grant funding, over time, to pursue local water projects to mitigate for Settlement impacts.  The first $10 million of these grant funds were made available in 2013 to Friant districts, and Tulare Irrigation District was awarded a grant in the amount of $1.95 million.


With this money and matching District funds, the District has:


The City of Tulare and the Tulare Irrigation District have been working for several years on cooperative ways to manage the expanding community of Tulare and the impacts on canals and groundwater consumption.  Working together, the District and the City purchased 155 acres located approximately 5 miles northeast of the City at the southwest corner of Avenue 256 and Road 132 to be developed into a groundwater recharge site.  The location of this property is ideal for groundwater recharge, as it is hydrologically "upstream" of the City and in close proximity to a District facility, the Main Canal.  After the site was acquired Provost & Pritchard Consulting, from Visalia, Calf. provided a design and environmental permitting to move the project towards construction.

The District and City sought and successfully acquired several grants to assist in constructing this project.  The grants that were secured include:

Construction of the basin was completed by District staff with Phase I of the project beginning in May of 2010 and finishing in March of 2011.  Phase I was put into service in the Spring of 2011 to take advantage of recharge water that was available to the District.  Phases II and III began in April of 2011 and were completed in June of 2013.  District staff worked diligently on the project while continuing to manage irrigation and flood operations carry out routine operations and maintenance throughout the District.  District staff performed construction tasks including, but not limited to, large quantities of excavation, compaction of embankments, grading, concrete structure installation, pipeline installation and SCADA installation.

The Swall Basin represents approximately 135 acres of additional area that the District can utilize in meeting a benchmark of 10,000 acre-feet of recharge on behalf of the City.  This basin represents and urban/agricultural partnership not often found here in the San Joaquin Valley.  Both the District and the City are acutely aware of the importance of water to our community and region.

All information provided by the Tulare Irrigation District on its Web pages is made available to provide immediate access for the convenience of interested persons. While the District believes the information to be reliable, much of the data is provisional in nature, subject to future revision. The District provides no guarantee as to the accuracy or completeness of the information. Neither the District nor any of the sources of the information are responsible for any errors or omissions, or for the use or results obtained from the use of this information. Other specific cautionary notices may be included on other Web pages maintained or referenced by the District.
Copyright © 2021 Tulare Irrigation. All Rights Reserved.
Web Development and CMS by Digital Attic